Teun Van Dijk and Norman Fairclough are prominent scholars interested in Critical Discourse Analysis (CDA), which is an interdisciplinary approach that analyses discourses by viewing languages as social practices.

Van Dijk sustains that ideologies are “system of ideas” which are socially shared by members that constitute a specific group (2006, 116). Thus, different types of groups embrace and foster different ideologies. Moreover, the author argues that these ideologies organize all other beliefs “that underlie the shared social representation” of a social group (Van Dijk 2006, 120). The author exposes the example of the feminist ideology that ‘controls’ practices regarding women’s issues and representations. 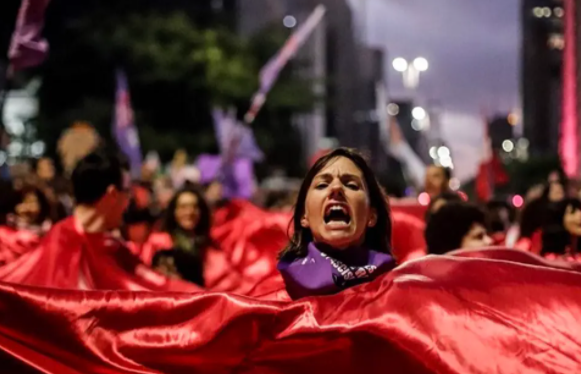 Van Dijk and Fairclough agree that these ideologies are shared, acquired transformed, and perpetuated to what they call discourse (Van Dijk 2006, 121). Discourse is understood by Fairclough as a wide variety of representations of social life (Fairclough 2012, 456). Moreover, Van Dijk understands that discourse is fostered by an ideology, and these discourses always represent a “Positive Self,” and “Negative Other,” the self is the protagonist of the group that is promoting the discourse (2006, 126). By doing so, discourse inevitably polarizes between members that are part of the group and those that are out-group, and intrinsically associate the idea that ingroup are good and out-group are evil as only possible attributed within the complexity of society (Van Dijk 2006, 124). Fairclough adds that there is always a dominant discourse that normalizes its ideology to the rest of society (Fairclough 2012, 457). Indeed, Fairclough affirms in his paper that society is structured upon relations of power between ideologies and therefore groups can feel dominant or dominated (Fairclough 2012, 456).

Nevertheless, Van Dijk emphasizes that power is not absolute, this means that ideologies are not just accepted by groups, but can be resisted. Although the author recognizes that discourse is reproduced by powerful and most of the time institutionalized groups, the feminist case shows how their ideology can foster a discourse that is contrary to the dominant one and invokes resistance to the structural powerful ideologies (Van Dijk 2006, 137).
As authors have reported, more work is necessary to complete a theoretical framework in which the characteristics of ideological groups are outlined. 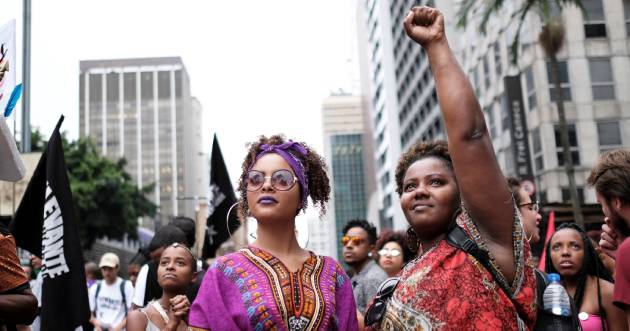 Feminist movement in Brazil and its construction of discourse.

The reviewed literature shows that the Brazilian feminist movement’s discourse has been dynamic and changed throughout history along with changes in its system of beliefs. However, studies have shown that the discourse maintained throughout time underlies a rigid structure that promotes the assumption that women have been oppressed by men – as dominant group – who have historically fostered an ideology (namely, patriarchal), through discourses; and have maintained their power by inducing social practices which are responsible for the construction of the gender roles in society. Moreover, women have always been and continue to be the interlocutors and owners of the discourse, and how Van Dijk states: women represent themselves as the positive Self within the broader society (Van Dijk 2006, 126).

The purpose of this feminist discourse in Brazil has been discussed among some of the reviewed literature in this paper. The Brazilian feminist movement discourse is constituted as an essentialist strategy to associate and create a causal relationship between women’s suffering and what they call patriarchal domination; for the authors this is a simplification of reality which eventually can bring more supporters. Further, the denouncement of oppression under the feminist discourse of ‘us women’ as oppressed citizens is a way to unite, politicize, reorganize and convince women of the feminist ideology, can be seen as an essentialist manner to gain support. The author adds, that ‘us versus them’ type of discourse opens the possibility for other women to feel welcome to join the group, it invokes inclusivity. Moreover, on the basis of Fairclough’s studies, it can be understood that the feminist discourse in Brazil has the purpose of fighting for social recognition, thus, normalization of the discourse and therefore ideology. 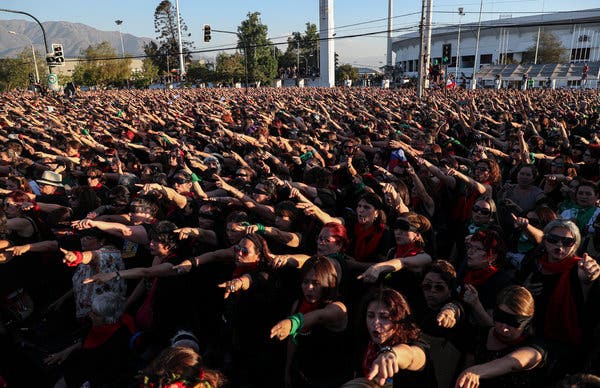 In order to organize the history of the feminist movement, researchers have classified historical periods in waves. During the 1970s, the second feminist wave took place in most of the countries in Latin America. In the case of Brazil, authors have agreed that the feminist movement in the 1970s began fundamentally committed to fight for other social – political struggles, such as for the democratic cause and freedom of expression, since the country was living under military dictatorship. Further, among the reviewed literature, only a few works discuss whether the Brazilian feminist movement arose under dynamics of Marxist-socialist ideology or if it began in a more independent manner. On one hand, some authors argue that due to the country’s political context – where the interests of women were in the name of resistance against right-wing dictatorship and the socialist-Marxist political discourses in the region were becoming popular in the region – inevitably the Brazilian feminist movement began to articulate its discourse under the influence of Marxist ideology. On the other hand, it can be stated that states that the feminist movement’s discourse was based on the concept of autonomy, and invoked the idea that the movement was independent of any political party or left-wing organization. However, the concept of autonomy was used in the feminist discourse meaning ‘emancipation’, ‘self-determination’ of women in a recognized and normalized patriarchal system that oppresses women. Moreover, there is still a potential open question concerning whether the feminist discourse in the country is based upon the Marxist-socialist ideology or not.

Further, different papers and authors highlight different changes in the Brazilian feminist discourse in the 1980s. With the re-democratization of the country, the movement began to institutionalize and started gaining voice within political parties and universities. Indeed, the PT (Workers party – Partido dos Trabalhadores) party and its allies were the main political supporters of the movement. Macaulay and Alvarez suggest that the discourse of the movement started to incorporate discourses of other social movements, such as the MST (Movimento Sem Terra), especially associated with the left-wing branch. Further, Alvarez and Da Silva suggest that the 1980s were marked by big debates within the feminist movement in Brazil, which gave voice to different types of feminism, such as black feminism, and consequently the rise of a wide variety of different discourses. Additionally, because of the process of re-democratization, there were vacuums of power and different types of feminism were in dispute for those spaces of power.

The literature highlights that despite the fact that the feminist movement was becoming “plural and heterogenous” there was the bridging discourse of ‘us women’ versus the other’. From the 1980s onwards the discourse was shaped by two concepts: diversity and intersectionality, still in place in the contemporary Brazilian feminist discourse. Da Silva criticizes the feminist discourse in the country, which now included ‘intersectional feminism’ because it has generated numerous paradoxes which still today the movement has difficulties to tackle. Indeed, another controversy is highlighted by Souza and Barbosa, who argue that intersectionality and diversity expanded the possibilities for every formation of gender and sexual identity to identify with the feminist movement in the country. Moreover, other studies focused more on the idea that the main discourse in the 1980s was that ‘the personal is political’, which is still present in the contemporary Brazilian movement discourse. Indeed, by that time, the movement, and its different branches began to focus on the contestation of women’s social position by opposing to women’s ‘fixed roles as wives, mothers and housewives. These fixed roles were given, naturalized and never questioned because of the dominant patriarchal ideology. However, the problem when analysing gender and discourse is how to choose or identify between so many different feminists’ discourses.

Further, there is a consistent body of literature which argues that the ‘us versus them’ discourse of the feminist movement became more evident in Brazil since the 1990s until today. The movement embraced other’s movement discourses of the broader civil society, and the ‘other’ in the discourse started to have some of the clearer manifestations. The ‘other’ came to be more explicitly ‘capitalism, ‘neoliberalism,’ ‘imperialism’ which are all categorized as ideologies. Within the feminist movement’s discourse these ideologies have been fostered by the dominant powerful group. Due to the different and wide variety of ramifications of feminism that came about in the 1980s, the different feminists’ groups understood the importance of having an inclusive and one-shared discourse in order for their actions to have more repercussion. Moreover, with internet and social media became the most important public spaces for the movement in order to establish the networks needed between the different feminists’ groups in order to develop a more united discourse (social media discourses are horizontal). Therefore, social media made the discourse improve, the production of material culture and slogans (short sentences) connected practices with individual and collective experiences. By analyzing some of the sentences, and quotes used by the movement in their discourse on social media it is clear that they deviate towards the defense of other minorities’ groups rather than towards the fighting against ‘machismo’. There are studies that focus on the analysis of these slogans in order to analyse the broader Brazilian feminist discourse.